I signed up with ThrustVPS on Jul 27, 2010. Sounded like a good company although I read a lot of bad review about Rus Foster who is now leading this new venture previously known as DamnVPS. There were lots of issues in the start and not to mention so many down times that went unaccounted for.

Hence I thought I need NAGIOS, I got it installed on the already 128MB small XEN PV VPS from QuickWeb (because it has great uptime). So when NAGIOS was finally up and running, I started asking Rus about Why there was a downtime etc. Here is a screenshot of the entire thread (click on the following image to enlarge).

Suddenly, last week, I got an email from Rus Foster, asking possession for a certain domain in exchange for a 6 month free hosting of the lowest VPS plan. I refused and told him I am not interested. Rus counter-offered with 1 year worth of hosting, I had to refuse again since free VPS hosting is not what I wanted. It did not appeal to me either because I was already getting $60 in affiliate commission every month WHY would It appeal me? Then comes the worst part, Rus told me he would have to terminate my VPS IF I do not give him the domain name AND accept the free VPS offer in return.

At this point, I thought for a moment and realized, why would I want to trust a low-down, blackmailing fraud company with my data? I turned down Rus’s lousy offer the last time.

Since, all data was already being rsync’d to two other offshore VPS from two different providers, I didn’t needed time to backup. All my account, VPS, backups and the $60 commission was terminated. I was even fool enough to pay my Aug 27, 2010 invoice almost two weeks before. Now I regret my decision. I could have saved that money. 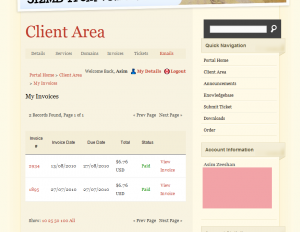 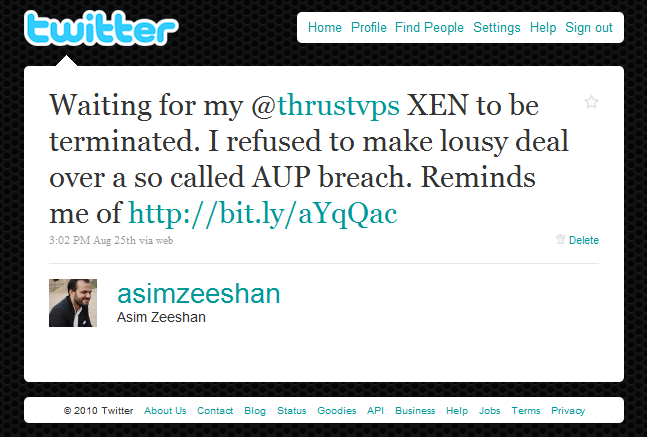 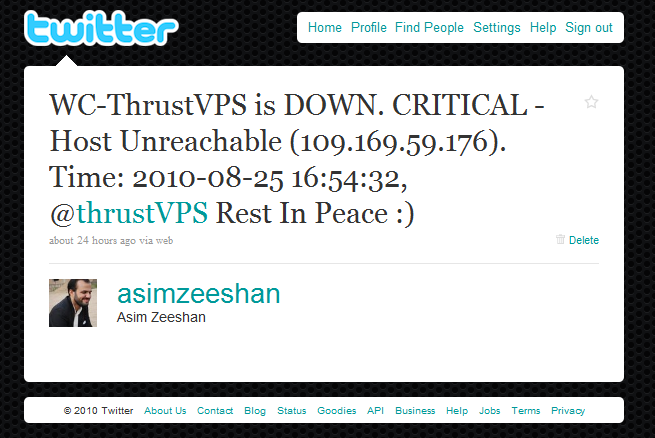 Overall, my experience with ThrustVPS was not so good from Day 1, Moved from node to node to get stability, then moved to XEN HVM and then finally blackmailed and terminated. I advise all to stay away from this fraudulent company. They will take your money, terminate your VPS and go after your domain names that you have.

52 thoughts on “ThrustVPS (A Review, Summary – STAY AWAY from them)”